“Every day I walk on a knife’s edge, but I cannot stop,” says Olga as she holds back tears.

She tells Sky News about the intimidation she faces from Russian troops in her hometown on Ukraine‘s southern coast.

It’s now been over three months since Vladimir Putin’s forces seized control of the place where she grew up.

Within days of Russian troops arriving, the town’s politicians were removed and replaced by people sympathetic to Russia. The price of food has now soared, and medicine is increasingly difficult to access.

Many of those left in the town are vulnerable: elderly people, disabled people, those with little money.

Olga, like many others in newly-occupied towns, felt compelled to help them.

Using encrypted messaging apps, Sky News has spoken to civilian volunteers in towns and cities across Russian-occupied Ukraine about their experiences. Their names have been changed for security reasons.

More on Data And Forensics

Olga has asked us not to identify the town where she lives, for her own safety.

Since early March, she says that she and four others have delivered food and medicine to more than 1,650 people.

“My stepfather lives in a village 60 miles from here. I didn’t manage to bring him here when the war broke out,” she told me.

“I helped a woman on day one. And after that happened, I got a call from my stepfather telling me that someone had brought him food.

“I realised that if I help people here, others will help my family somewhere else,” she said.

The group started by pooling their own resources. But she now receives donations from the friends and family of those in need to help pay the inflated prices at the local market and online.

“We try to buy whatever’s left in Ukraine. But, unfortunately, we are already having to order stuff from Russia,” she says.

“What can we do? People are hungry.”

She believes that around 25-30% of people in her town are sympathetic to Russia. But the rest face a difficult path of having to survive under an occupation with which they disagree.

“Many of my friends were detained and tortured. They want us all to walk over to their side. They want us to collaborate with the orcs, with the Russians,” she said.

Olga says volunteers in her town have been targeted by Russian troops.

“My work is very dangerous,” she said. “We all ask each other: why they would target volunteers? Nobody knows the answer.” 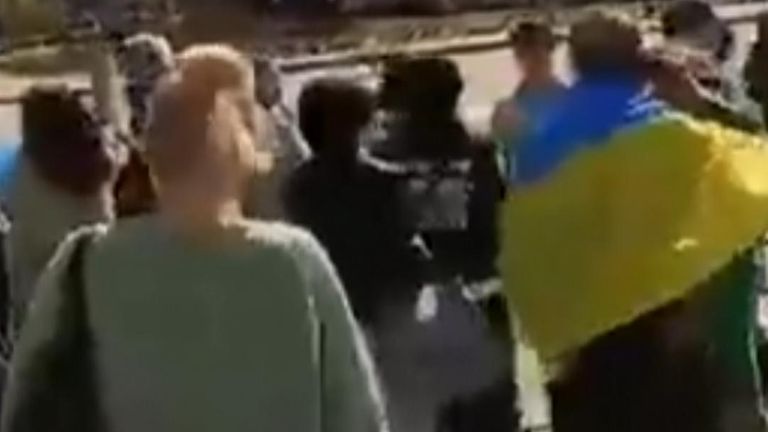 Olga says that although there are attempts to get humanitarian aid to the town, it often does not reach those who need it.

“Sometimes a lorry with aid would stop in a crowded place and they would throw things to people like dogs. People begin to fight among themselves, pensioners, all sorts.

“The Russian soldiers stand there laughing, taking pictures, smiling. They think it is funny. I have personally seen scenes like this,” she says.

“I am not afraid for myself but for my family and for people in general. We are nothing to the Russians.

“There are constantly people with assault rifles next to you and you don’t know what they may do next,” she said.

“We are like zombies. You walk around and you are scared to make the wrong move.”

Sky News has not been able to independently verify these claims. We did ask the Russian Ministry of Defence for comment but have yet to receive a reply.

Human rights experts say that the targeting of civilian volunteers, as well as journalists and activists, is widespread in occupied Ukraine.

“One of the major Russian strategies is to starve people into obedience, to break them physically,” Nadia Dobianska, a researcher at Ukrainian human rights organisation ZMINA, told Sky News.

“They are destroying all independent access to food, to water so that people become dependent on the Russians. So all the people who are trying to help civilians escape the suffering are viewed by the Russians as dangerous,” she said.

Irina’s story from the city of Kherson

Irina lives in Kherson, which is situated on the Dnipro river.

Like Olga’s hometown, Kherson was quickly captured and a new local government installed early on in the war.

She works full-time in the healthcare profession, but helps the few volunteers still left in the city when she can.

“The moral pressure on civilians is huge,” she told me.

“When you go out somewhere, you need to be really careful with your phone. Photos, chats… you need to delete Telegram, Signal and Instagram because if you are stopped by an occupier he can look through your phone.”

Irina mentioned one incident where a Russian soldier spotted her sunflower tattoo and declared that she had a “Nazi symbol” on her body.

But unlike Olga, Irina does not fear the occupiers.

“Those who are still here and don’t want to leave are just waiting for the Ukrainian forces to come back. Some of us are scared, but others, like me, have fighting spirit. It’s an individual thing, but the general atmosphere is tense,” she said. 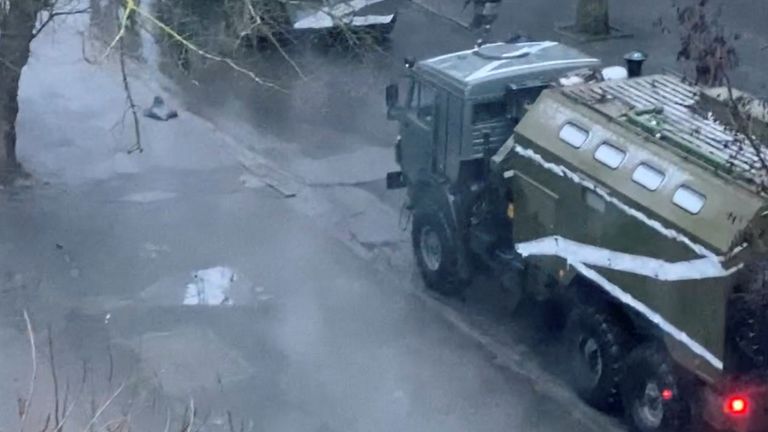 Irina says volunteers in Kherson have also been directly targeted by Russian troops.

“They are seeking them out: kidnapping, terrorising them.”

“Volunteers must operate in secret. And if you’re too active, they’ll come for you,” she added.

However, it’s not the same for everyone volunteering inside occupied towns.

Around 180 miles away In Melitopol, Andriy runs a volunteering organisation that has been active since the war started.

The group began by delivering aid to hospitals and has recently opened a headquarters in a former media centre from which they have been able to distribute hundreds of aid packages.

“No obvious, open measures have been taken yet against volunteers, but I do have concerns,” he told me.

Like Olga’s town and Kherson, the price of food has skyrocketed in Melitopol, meaning many people cannot afford to eat.

“When the war broke out, people lost their jobs, they lost work. The first two months were still okay because people still had reserves: food reserves, and financial reserves.

“But now, people simply have no more money left to provide for themselves. There is no work. Many people have no money at all, not a penny,” he said.

Andriy says supermarkets are closed and ATMs do not work in the city.

“Life is awful here, we are living like in the Stone Age.”

The Data and Forensics team is a multi-skilled unit dedicated to providing transparent journalism from Sky News. We gather, analyse and visualise data to tell data-driven stories. We combine traditional reporting skills with advanced analysis of satellite images, social media and other open source information. Through multimedia storytelling we aim to better explain the world while also showing how our journalism is done.